The Bulgarian Chemical Weather Forecast and Information System is designed on the base of US EPA Models-3 system: MM5 (meteorological pre-processor), SMOKE (emission preprocessor) and CMAQ (Chemical Transport Model). The meteorological input to the System is the NCEP Global Forecast data. At the moment, the system is running automatically once a day. The forecast period is 3days (72 hours). 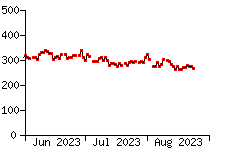 The total amount of ozone in the atmosphere is measured in Dobson units (DU), which represent the height of total ozone, reduced to normal pressure and temperature in units of 0.01 mm. Its values vary considerably depending on the season. For the period 1996 - 2015, there was a trend for an increase in ozone over Bulgaria with around 0.2 DU per year. 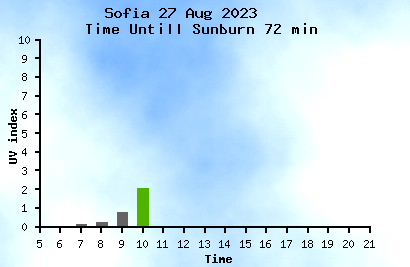 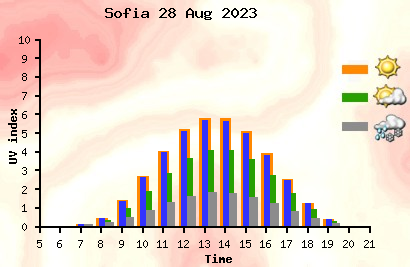 The level of ultraviolet radiation presents with UV - index. Values below 2 level is considered low, for values of 2 to 5 - average and over 5 - high. Currently: UV-radiation in Sofia - LOW. No protection required.

Apart from the daily weather and seasons, UV-index depends on the cloudiness. In the forecast for tomorrow blue color shows possible values. 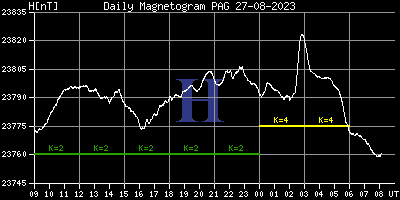 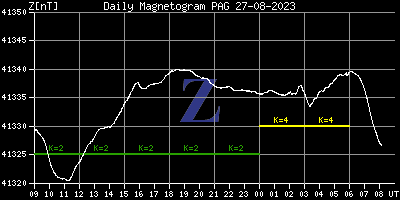 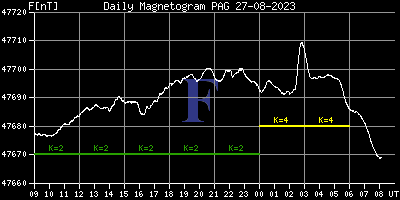 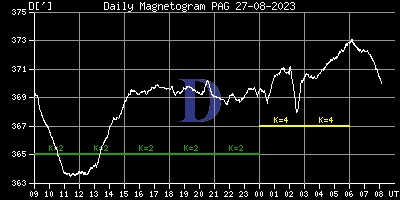 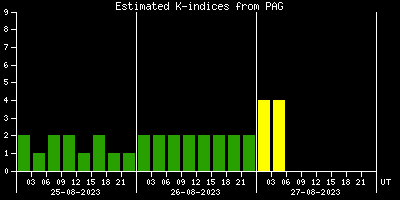 The vector of the Earth's magnetic field at a point on Earth is represented by its three components - horizontal component, the angle between the direction of the horizontal component and the geographic north (declination) and the vertical component. In quiet conditions the components change during the course of each day in small limits, and magnetic storms when their variations are reinforced repeatedly.

Over the past 24 hours: Variation of the horizontal component is: 82 nT (0.34 percent of average 23784 nT.) This corresponds to a quiet state
Estimated Local Geomagnetic K - indices from station "Panagyurishte" 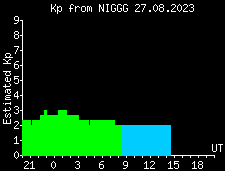 Geomagnetic activity is a measure of disturbances of Earth's magnetic field on a global scale and is represented by Kp - Index. Values below 4 mean quiet state, values between 4 and 5 - active, than 5 - magnetic storm. 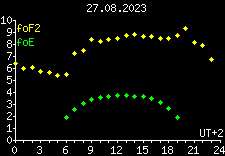 Estimated critical frequencies of the ionosphere over Bulgaria could be useful for radio amateurs and to all who deal with short-wave radio. Apart from the daily time and season, they depend on the level of geomagnetic activity during the last day.

A global maps of the total electron content (TEC) in the ionosphere can be useful for GNSS navigation systems. Apart from the daily time and season, the global distribution of TEC depend on the level of geomagnetic activity during the last day.

National permanent GNSS (Global Navigation Satellite Systems) network consists of 20 permanent GPS / GNSS stations whose data are archived, processed and analyzed at the Center for processing and analysis. Processing and analysis of measurements allows for monitoring of current crustal movements in Bulgaria and the Balkan peninsula and, together with the seismic information to assess the seismic risk.